Tools of a Leader: Communication 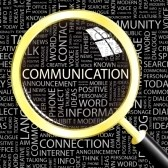 Author, speaker and leadership guru John Maxwell defines leadership as influence. If that is the case, I believe communication is the “WD-40” of leadership.  Simply put, if you don’t communicate effectively, it is difficult to lead effectively.

I don’t think anyone starts a new job or begins a new task without having the intention to be successful. If they fail, it is often because expectations were not communicated clearly.

We have all experienced leaders who did not communicate effectively. They are hard to read and difficult to please since their unclear or irregular messaging leaves us in doubt and uncertain as to how to help them be successful.

The root of the word communicate is commune, meaning to come together.  As leaders, our goal should be to help our people become successful, contributing team members. Good communications, or the effective use of words, does just that.

George Bernard Shaw, a writer and a co-founder of the London School of Economics, said, “The single biggest problem in communication is the illusion that it has taken place.“

Good communication is especially critical in the workplace.  Even today, with the myriad of communication devices and their multiple applications available at our fingertips, we often fail to communicate properly. My iPhone sometimes has a mind of its own and communicates unintended messages. I have a friend who mistakenly communicated the following email to an important client. He was trying to say, “Sounds like you are stuck and need help”. The message his iPhone sent was, “You suck and need help”.

There’s a good chance that at some point in your career you will be accused of either under or over communicating.  To my knowledge, no team has ever been defeated because the leader over communicated. On the other hand, the reverse has caused the defeat of many a good team.

Strive for a good balance, but if you are ever in doubt, over communicate.

Posted by Hotel Equities at 2:43 PM No comments:

Welcome to “Stuff Worth Sharing”! It is our hope that this blog will help you to know more about our Founder & Chairman, Fred Cerrone, as well as gain some insight into his vision and dreams for Hotel Equities. We welcome your feedback as well as any topics that you would like Fred to cover. Thanks for all you do to help make Hotel Equities a success!

Value of the Month

Having integrity is doing the right thing when no one is looking.

What do you want Mr. Cerrone to blog about next?